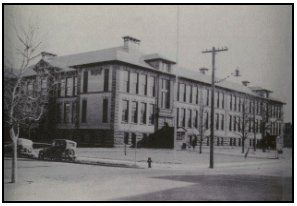 Education could not be a minor subject in such a promising place as the Jersey shore, and about the same time as the first church was being planned, parents were eagerly working toward an educational system that now ranks with the best.

The first classes were conducted by one teacher in two rooms over a Main Street store. in 1886-87 the first school bulding was built on Fifth Avenue, a little wooden structure with three rooms upstairs and three down. The grades ran as high as the fourth grade, from wich students paid tuition to tranfer to the Asbury Park or Neptune schools.

In 1904 the members of the school board held an indignation meeting. They were determined to sever connections with the Neptune school district, since they had figured that it would be more economical to run their own district than to pay the high rate charged by Neptune Township. They resented the fact that Neptune should send its old books to our school. They following year the board determined to take action. Upon the advice of the borough attorney, they took possession of the schoolhouse and broke the lock to the front door on July 6, 1906. One of the first items listed in the records of that year is the locksmith's bill for fitting a new lock to the door. The enrollment increase was so rapid that in 1910 the present building was erected at a cost of $85,000.